That’s the Way it Go’s

It’s true, you can’t really make plans in the sailboat world. This past weekend was  beautiful for sailing and getting away. ‘Didn’t quite happen…

So during the week I’ve continued doing my commuting between work and boat. In the evenings usually hang at the port with Kostas after dinner at Vicky’s. She made this pizza… homemade dough with cheese, tomatoes, bazil in the oven, and the last five minutes adds prosciutto (which I’m not a fan of)…. to die for! 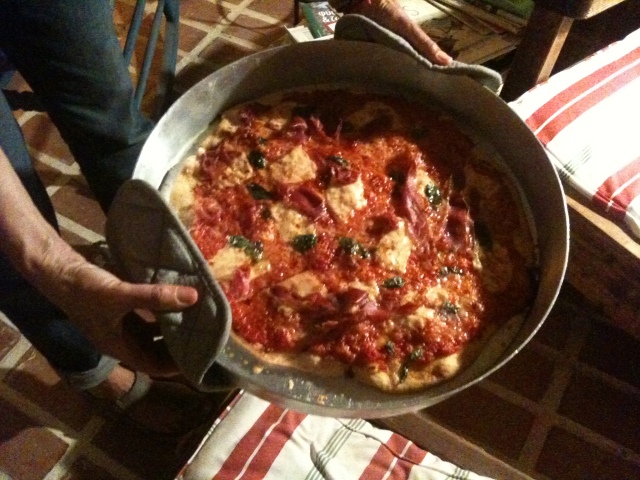 Any hoo… Friday was a “skipping school and shooting pool” day (thanks to me mate Blaz!). Slightly cloudy but sunny and I got some deck work done (rig tuning, it was slaking). My friends Alexandra and Nick were coming and I wanted to head out of Kalo Gialo. They ending up arriving Saturday at 2:30 (WTF there goes half the day). After settling down we heading out to the little Perati island till the evening. The breeze was fine and since Nick has done some sailing before, we unfurled the sails. Since Perati is only 2-3mile, I left the engine on. After a half an hour I notice white smoke from the stern and the old Perkins was ker-cluncking. I shut down. Checked her out, all seemed fine, no leaks, fluids where good. Tried to restart but nada and then she wouldn’t turn over. WTF! So we head back. Since there was “some” wind and Nick was having the time of his life, I didn’t let the situation get me down.

After tying up at my mooring under sail alone (hey! I’m getting good at this), we proceed to have some lunch, pops and generally a good time. I did deal with the Perkins a bit, broke out the “big” socket to see if it hand-turns (it does) but she still wont start. WTF… f-it… tomorrow’s another day so we continued enjoying the day.

A good time, not as I had planned. The worst part was a ridiculous swell, and I mean ridiculous. Nothing was safe… making tea was a chore.

Sunday morning I had a rendezvous with the old Tahiti Ketch guy to dive on his missing(?) mooring. (Before that I did get the Perkins to start but she wasn’t happy at all so I aint doin’ nothing till I get Kostas). The diving didn’t happen cause it had gotten cloudy and began to drizzle. So…

I just decided to go straight to G.S. for ouzo and lunch. Vicky made pastitsio. There was so little bechamel it came out fantastic, like oven-cooked spaghetti with mince meat… I love that girl’s cooking! They also had some friends over and one of the twins.

Back on the boat the swell was back so I called it an early day and got back to the “city” relatively early.

ps… got a rendezvous with Kostas this afternoon (Tuesday). Fingers crossed but feeling slightly pessimistic.

6 Responses to That’s the Way it Go’s