Deja vu! Since I bought Zoot Allures I’ve had a fetish about the bilge. Mostly because it’s a deep inaccessible shit hole! Well now with the engine out I though life would be good. Wrong!

It’s gook city. Old oil, antifreeze and general debris. Ok, some antifreeze was spill during the Perkins removal but still, what a freaking mess. Last Wednesday morning before work I went in to “break the ice”. First line of buisnes is to hand pump the kaka, collect the various lost and forgotten”things”. I also blasted out to get 2 jumbo rolls of kitchen towels and domestic degreaser, and some beer. I had to get the first level half decent in order to proceed deeper with out all the crap getting all over me.

At some point it was safe to enter. I gathered lots of stuff. Some useful, like washers and one of the coupling bolts I had dropped, and the I used a spatula to shovel out the crud. Knowing I needed some hardcore degreaser, I played around on the front wall for a while since I was able to sit. I made a hole in the water… Ok this was

and I now know what I’m in for. I wasn’t going full monte cause I did have to go to work in the evening. I cleaned up the “new toys” I found down there and did a bit of tidying up 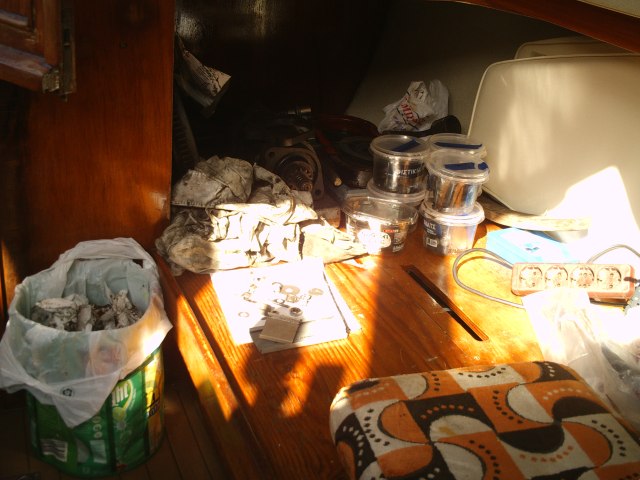 and I left it all looking a bit better

The day after, I blasted out from work and ordered Perkins parts. Since I was running around I also went to Piraeus port to a chemical company to get the nasty stuff… 2 liters of acetone and 4 liters of the hardcore degreaser. Also some WD40 (I’m always running out) and also some kerosene for more stove experiments.

On Saturday I went down fully equipped. Well almost. I need a space suit! The fumes, the fumes… holy crap! I left half the floor in place so I could make quick exits to fresh air. Inside I would brush on some degreaser (while holding my breath), hang in the cockpit for a while to let it work, back down to give it a scrubbing and then rinse it down with fresh water and the pump it out in a bucket for disposal. And then I did it again! After 3 hours I was done. The bilge need a couple of more days!! This is god-awful!! Then I went back to the city to work!!

Sunday I wanted to do more, but alas… my meniscus knee problem saved me. I could barely walk. I went down and opened up to air ol’ Zoot. Then I just hug out eating and drinking. Hey, you gotta burn one every once in a while!!

Yesterday I got the Perkins parts. Hopefully going in Thursday morn.